This won't be a recap of the last 2 months, just a few art related things. I got off track art wise after getting home from Florida.... just too many distractions. I even stopped doing my daily postcards. We had an unbelievably beautiful spring, very few rainy days. The great weather has continued into summer. It might be over now..... it rained this morning but the sun came out for a while this afternoon.

Van has been out fishing since mid-May. Last fall and before he left, he doubled the size of my little gallery. I did some painting inside and have gotten things out there.... was afraid I wouldn't have enough to fill it up, but I have. 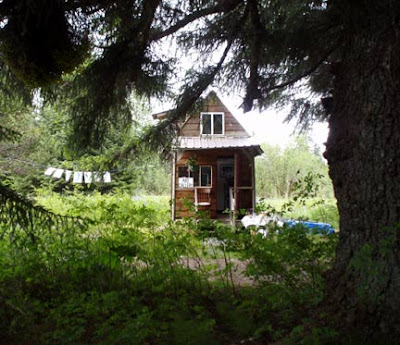 This is the way it looked before... 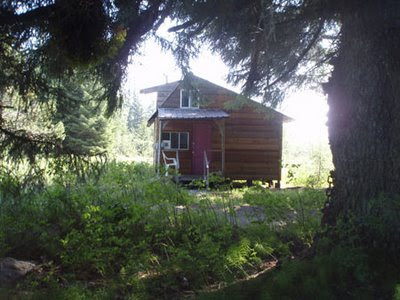 and this is it now. It was quite a job to raise that roof. I've been opened a few days.... its just a matter of putting a sign up out on the main road when its open and taking in down when its closed. Not getting many people in though. The inns and B&Bs are way down in guest this year. 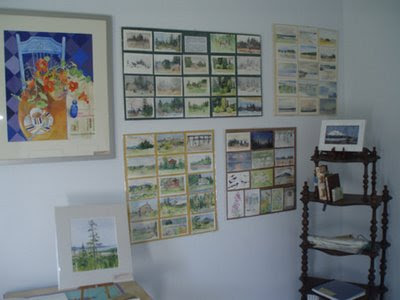 I mounted some of my watercolor postcards to show at the school last winter and put them up.... these were all done in 2006. These are not for sale but sometimes I will give one away. Maybe someday I will sell them, but now I think of them as sketches in my journals. 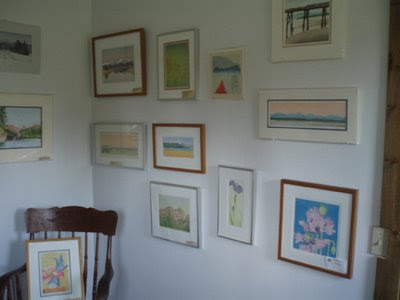 These are some of my woodblock prints. 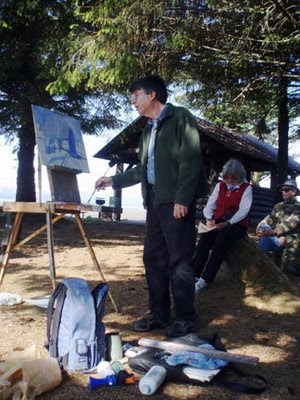 The weekend before last, I went to Juneau and attended a 3-day plein air painting workshop with the Plein Rein Painters taught by Fairbanks artist David Mollett. This is David doing a demonstration with acrylics.

I had tried oils a couple of times years ago and decided that was what I'd work in. The weather was sunny and scenery beautiful. My first days attempt was an oily mess that I wiped out at the end of the day. The second day I used less paint and learned a lot.... didn't finish it and might work on it some more. 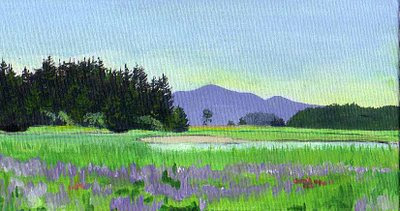 I went smaller the 3rd day. Just the mechanics of the painting with oils was a challenge.... like where to put the brushes. The first 2 days I worked in the shade. This was done in the sun and it dried much faster which helped a lot, but I had trouble with the values. It was frustrating but I enjoyed it and want to continue with oils but haven't since I've been home... so much to do, so little time.

I'm now working on a woodblock print. the only prints I've done in the last few years have been for exchanges.... I'd probably do more if they sold well. This one is for a Baren Exchange..... I was way down on the waiting list but moved up recently. I've had a image in mind for months, but after getting started, decided on something quite different.

I'm hoping to get it finished in a few days. My grand daughter, Alyssa will be coming out from Juneau for a while.... maybe I can get some painting done while she is here, but maybe not.
Posted by Carole Baker at 7:40 AM 4 comments: