Any time I try painting something larger than about 6 inches wide or high with gouache, I end up with having to wipe out a lot and struggling with the sky. I can usually get a large area of flat color, though I'm still having trouble predicting what its going to look like dry, but I really have trouble when there is some gradation...as in the painting posted last week. 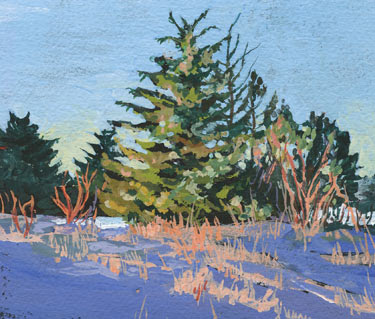 This one came a little easier than the last one being smaller. In fact I was surprised how quickly I did it. Its from a photo I took last winter at the beach. I love the way the grasses and willow glowed from the light of the setting sun.

I did another one from a photo from that same afternoon and was going to link to it here but after waiting for the archives to load for a half hour, we'll forget that. I guess its from just too many people using the system here in the summer that makes it so much slower than in the winter. Some times I can't even get connected. I could have gotten a good start on a painting in the time I've spent with this entry and am asking myself why I do this.

LATER: Well, it dawned on me after publishing this that I could just go to older posts and find the painting I was looking for, so I did and couldn't find it. So then, in the depths of my brain, I remembered my other blog and looked and found it there. The stuff on the side of my blog still isn't coming up. Maybe its blogger.
Posted by Carole Baker at 8:02 AM 5 comments:

VIEW FROM THE HYDRO ROAD

As usual, the summer is flying by.... just a few days until solstice and the days will start getting shorter. We finally had some rain but most days are sunny. I've been opening my gallery every day and having a few people come by. I've moved a table out here and have been drawing and painting between visitors. The internet comes slower out here, but I've got lots of time.

Today was the dedication of the hydro-electric plant here that has been in the works for many years and came on line last year. Until the hydro, we relied on oil powered generators for electricity. For the first few years we lived here, there wasn't even that and we used propane lamps and only used our little generator for washing clothes.... those were the days.

Anyway, most of the town folk walked or got a ride up the hill and were treated with burgers and hotdogs and listened to speeches and got a tour of the facilities and best of all got to look at the falls and the view of Icy Strait from about 600 feet.

Here's a painting I painted last week from a photo I took from up there last year. 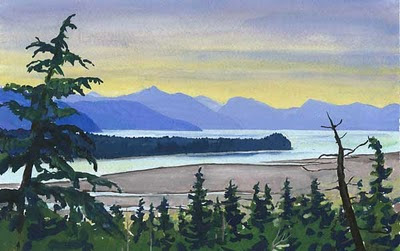 This doesn't look like I'd envisioned but after getting away from it, I kind of think its OK.
Posted by Carole Baker at 3:28 PM 2 comments:

The warm sunny weather continues. What little rain we've had has been at night and not very much. We did have a thunder storm one day (but not much rain with it) which was quite unusual for this time of year.... most years go by without any thunder being heard around here. It is an El Nino year, but despite what our former governor and other yahoos say our globe is warming. Oops, getting political so I'll go to other matters.

This summer is quite different than most.... Van has gone to Sitka to fish every one of the last 30+ Junes since we've lived here, but this year he has fished nearer to home and has actually been home some. And the weather is keeping me outside more than usual..... I've been waiting for a cool raining day to do several things (like keeping up with this blog) and those days just aren't happening. Today is cloudier than usual so here I am.

I opened my gallery last week, and this year I am opening 6 days a week for 3 hours rather than being just on call or sporadic. I've spent a lot of time matting my new paintings and getting things ready and very little painting.... but my work is cut out for me for the next year.

I had applied for a one person show at the Juneau Arts and Humanities Council last April and expected to hear something at the beginning of May and had about decided I wasn't accepted but at the end of the month I got a letter accepting my proposal and am scheduled for a show next April. I'm going to have to put a lot more time into painting than I have been these last few years and am happy to have some goal.

And I might be taking on an other project doing some botanical illustration with pen and ink. Its not quite a sure thing yet, but I'd really like to do them.

Well, I need to put a picture on here. 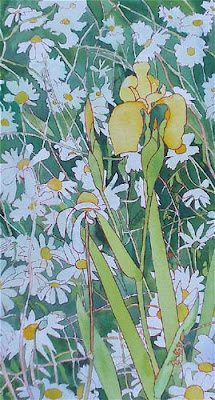 I painted this several years ago..... it never really finished it to my liking, and at some point I had outlined everything with a red Nexus pen. Yesterday I cropped it and fit it into a mat that I had cut wrong for another painting and it seems to work now and its hanging in the gallery.
Posted by Carole Baker at 9:47 AM 2 comments: