This is the first day of my challenge that I didn't paint anything.  After a brunch with friends, I took my pallet out of the freezer and went to the studio.  Then I proceeded to clean up the studio and make a  shelf for the little wet paintings that were all over the place.   I got the paintings all lined up and asked my husband which one he liked best.  He picked the the only one that wasn't a new one..... one that I did over a year ago.   Very sad. 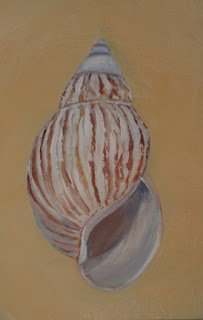 I worked on this one off and on for a few days this week.
Posted by Carole Baker at 11:50 PM No comments: 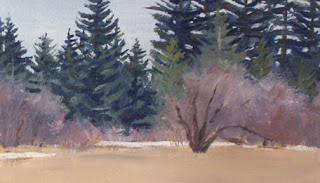 I started this after finishing the apples and knife yesterday afternoon. Its the view out the window.  I had a mixture of left-over paint that looked just like the willow trees in the middle-ground.  As you can see, almost all of the snow is gone.

I almost started another apple painting today, but I really wanted to paint landscape... and not from photos. I drove around looking for something to paint and ended up at my neighbor's house and painted some buildings.  It is still pretty cold, so I sat in the car.  I didn't finish though and will try to get back tomorrow to finish.

I was looking back at some of the painting I did last winter when I was working with the oils.  I seemed to be getting comfortable with them and showings some progress and then put them away for almost a year.  And here I am feeling like a beginner again.  Well, this time I'm going to stick with them or get rid of them, and I'm feeling more and more like I'm going to stick with them.
Posted by Carole Baker at 11:54 PM 4 comments: 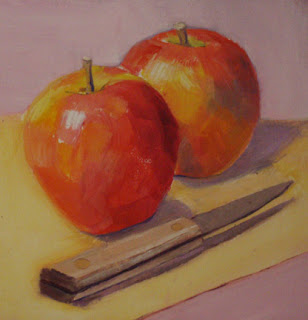 Another try to paint apples.  The one in the front was easy; the one behind it a different story.  It got wiped out a couple of times.    I haven't been planning my compositions much on these still lifes.... just concentration on getting the objects painted and adding the rest as an afterthought.  Next time, I'll plan the whole thing before starting.

Posted by Carole Baker at 9:13 PM No comments: 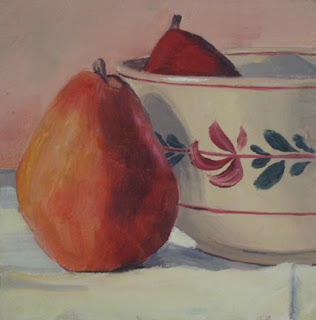 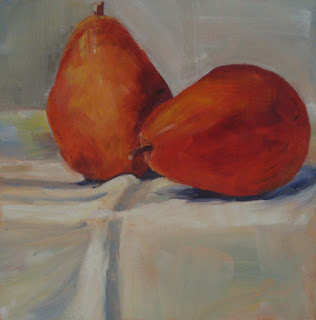 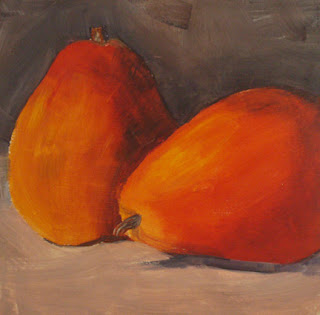 I painted these on Monday and Tuesday.  I was pretty happy with the one with the bowl which I painted first.  I thought I could improve on the pears in the second one and again in the third one, but didn't.  I do like the tablecloth in the second one though.

I decided yesterday to work on painting an apple and spent hours.  I don't know how many I started and wiped out and burned the three I finished in disgust.  This morning, after looking on line how some other people painted them,  I tried again with this one, which at least I'm not embarrassed to show here. 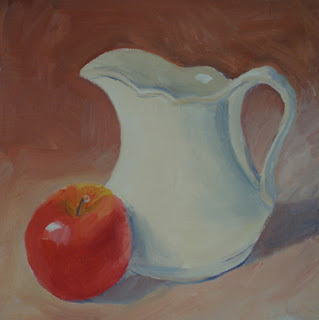 water mixable oil 6 x 6 inches
This gets me up to the present time. There are a few more paintings that I haven't posted and probably won't unless they start looking better to me. 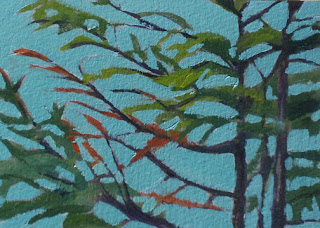 
I showed a friend my growing collection of little oil paintings yesterday.  She asked me what this was a painting of.  So, if you don't know, it's some trees against a blue sky. 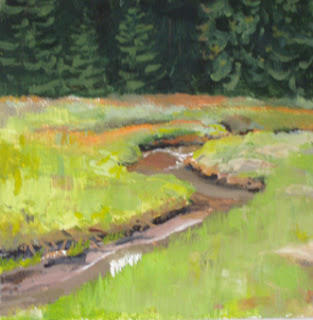 This was painted from a photo I took last summer off the road to Bartlett Cove.  There were a lot of willow along the creek that I didn't put in.  I might try painting this larger.
Posted by Carole Baker at 10:02 PM No comments:

You might be wondering where the other 6 days went.  Well, I decided that I would stick with the original starting date instead of what I wrote yesterday. 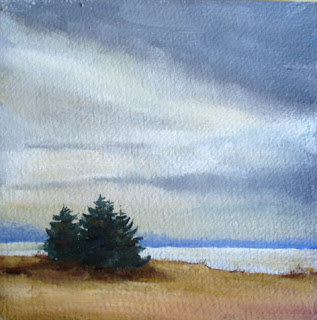 This painting from last week was somewhat copied from a watercolor (below) that I did in January. Its painted on a gessoed piece of watercolor paper. 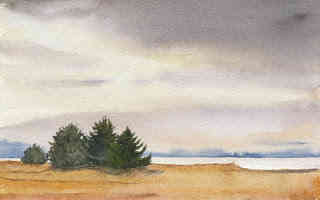 After really committing to painting 30 paintings in 30 days yesterday I had a very bad day of painting.  The painting I'd done the day before needed more work and  I didn't succeed in making it better. Another start got wiped out.  I was contemplating putting the oils away again.  That's what I did last year when I was sort of getting the hang of painting with them and then got frustrated.  Probably if I hadn't  said on this blog that I was going  to paint 30 paintings in 30 days I would have put them away.  But I didn't and today's painting didn't get wiped out. 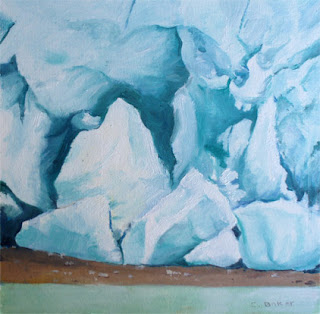 Well, my challenge to myself to paint 30 oil paintings in 30 days is happening.  Though I've painted something everyday this week, I'm going to call today "Day One" as far as my postings go.  I couldn't find the USB cord for my camera, so wasn't able to post any photos until now.  And at least 2 of the paintings done so far aren't finished, and maybe won't be  I do want to be able to post something everyday and doing it this way will take off some of the pressure.

This painting, done on Monday was from one of my old photos of Reid Glacier. I observed a couple of artists using water mixable oils at the artist retreat in Juneau last week, and they didn't use media... only water.  I had previously used Winsor and Newtons linseed oil made for the water mixable oils and this week have not.  It has made it much simpler.

I'd love to have anyone join me painting, and will appreciate any encouragement. 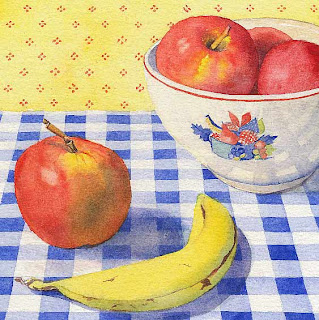 I got home from Juneau on Wednesday and have been slow to get going in the studio again.  This always happens when I leave.... I just can't seem to get back into a good routine for a while.  Well, I'm here putting something on my blog which is a sign that I'm getting back in the groove.

I painted this still life Saturday and Sunday.  It took most of Saturday to set it up.  I sure wish I'd put the banana closer to the apple.... there's always something.   The Calico Fruit bowl was my mother's.  It has a pretty bad crack in in and I've used it in two other paintings, with fruit, of course.

Although the weather was wretched in Juneau, the retreat was fun and  I painted a few little watercolors from the window and we went to Amalga Harbor on Sunday when there was a short break in the weather.  After I got home, I worked some more on the gouache painting that I've been piddling with for about a month and now its with another painting that I worked on for weeks and am still wondering how to finish.  I'm not going to look at either for a while.

Yesterday I got the water mixable oil paints out and  painted a small painting which I actually like.  And did another today which I don't like so much, but gessoed a bunch of mat board to do some more on.  And am at least thinking about challenging myself to painting 30 oil paintings in 30 days. 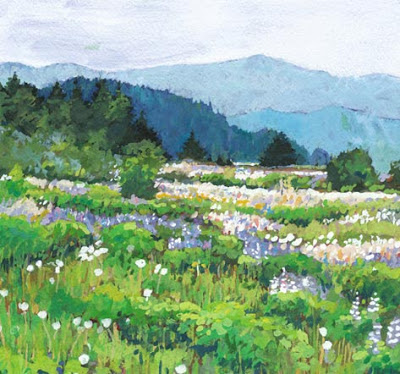 Well, here it is a new month.  February surely went by quickly.  My challenge to myself for the month of February included producing two paintings a week.  I can say I did that, although some will never be seen again.  As I've lost much of the momentum that built up in January with the 30 paintings,   I've contemplated stating a one painting everyday  goal for March, but there will be none.  I foresee much distractions from a steady stream of painting... including working on taxes and will be going to Juneau sometime this month.

Right now, I'm working on a gouache painting that is larger than most.  It started out as a watercolor which I spent considerable time on and was about to give up on.  I know it will take a while to do at my slow pace with gouache.  I will continue with this painting before starting something new.

Here are three small paintings that I did during the last couple of weeks: 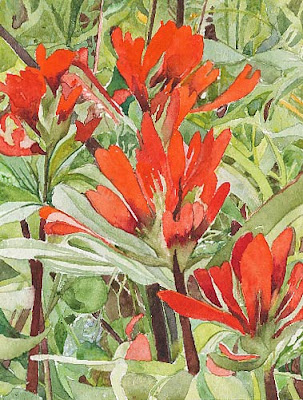 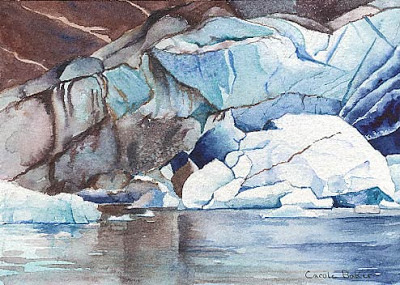 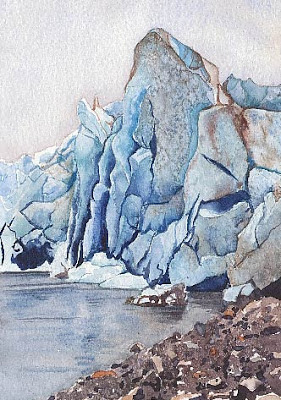 The first one is of wild paintbrush, one of my favorite wild flowers.  The other two of of Reid Glacier, in Glacier Bay, painted from photos I took in the 90s.  The paintbrushes were in Glacier Bay too.