Last weekend, I joined the Plein Rein Painters of Juneau  for a fun and inspiring retreat.   The talented group of painters have been getting together every Saturday for several years and have for a few years gotten together for a retreat,  usually in March or April.  This year they decided to have it later when the weather would be better, but who knew that this year the weather in April would be better than in May.
The retreat took place at the  Jubilee Cabin at the Shrine of St. Therese.    and though it rained most of the weekend,  the view from the window was beautiful and some of us went out on the covered porches and painted.  I did a couple of little paintings with water soluble oils and some watercolors.  This is one of them, the view from the window. 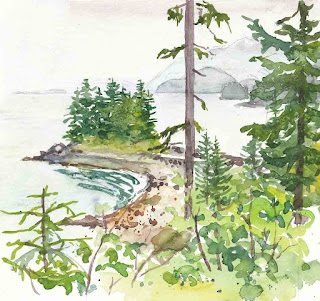 
I was working on a gouache in the studio before going to Juneau and I haven't touched it since coming home on Monday as  I've spent most of the week getting my computer to work right which I've elaborated about enough on my other blog. I have continued to do my daily small drawings/paintings and after the computer problems, started  posting them again today.

happy to have a view of your wonderful work again...
you are still amazing...

i am yet to find an apt place for the painting you have sent me...
i will definitely post out family photo with your painting as soon as i find such a place in my small house...